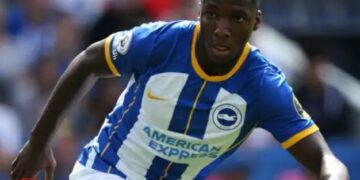 by Amalai Emmy Smilez
in Sports
2 He was born on 2 November 2002 from Santo Domingo in Ecuador, he weighs 73kg and has a height of 1.73M and therefore he is Ecuadorian by Nationality. His current club is Brighton & Hove Albion ,midfielder by position wears shirts number 25 at the club and 23 at the national team.

The Brighton Midfielder has a wish and a dream to join Chelsea Fc amidst the desire for him by his former couch Graham Potter who left the club to join The Blues due to the dismissal of Thomas Tuchel last week on Tuesday 6th over the 1:0 loss against Dynamo Zagreb in the Champions League.

The player is from Ecuador and has had an amazing start this year with Brighton, he says he loved so much playing under Potter and he became disappointed when the Solihull international departed.

The 20 year Ecuador international says although currently he is focusing at the world cup and his Brighton career, he knows that he will link back with his former coach at the bridge anytime soon.

He added and said “You may be here today but you never know what tomorrow hold, you can be in another club, that’s the manager’s job”

Moses Caicedo has always been a target for many English Clubs to include Arsenal and Manchester United but however it might be an opportunity for Chelsea under their new manager Graham Potter who came from the Seagulls side.